This is the third post in the TIIS-Matrix series. The first is found here and the second one here.

We’ve looked at the TIIS-Matrix’s main ideas regarding Telling/Involving and Instructor driven vs Student driven learning (training) activities as well as gone and placed these activities in the matrix to get a feeling of the differences between the four quadrants.

What’s next to do is to look at each and every of these activities and think about what would happen if this particular activity were to improve. Where would it go inside the matrix? And the opposite, if an activity was as bad as it could get. Where would that activity go? Which new location in the matrix would it be placed at?

Let’s take a look at the activity of Workshops. I placed it in the II-quadrant (Instructor-driven / Involving) since it’s usually run by an instructor or manager and the activity is highly involving if done properly. Now imagine the ultimate workshop. What would that look like? I’m envisioning a workshop which is even more controlled by the students/participants. It might’ve even been initialized by them. With more influence we might cross the threshold to the SI-quadrant (Student-driven / Involving) and at the same time increase the amount of involvement felt by the participants.

If we imagine the opposite for our workshop activity. The instructor/manager takes control over what’s being discussed and the participants feels like they’re being told what to think/say/do. In the picture below I didn’t let the red line cross into the IT-quadrant (Instructor-driven / Telling) since if it was to go that far it wouldn’t even be a workshop anymore, would it?

If we do the same thing for all of our activities in the TIIS-Matrix we’ll get the following, and pretty messy, picture (click to enlarge): 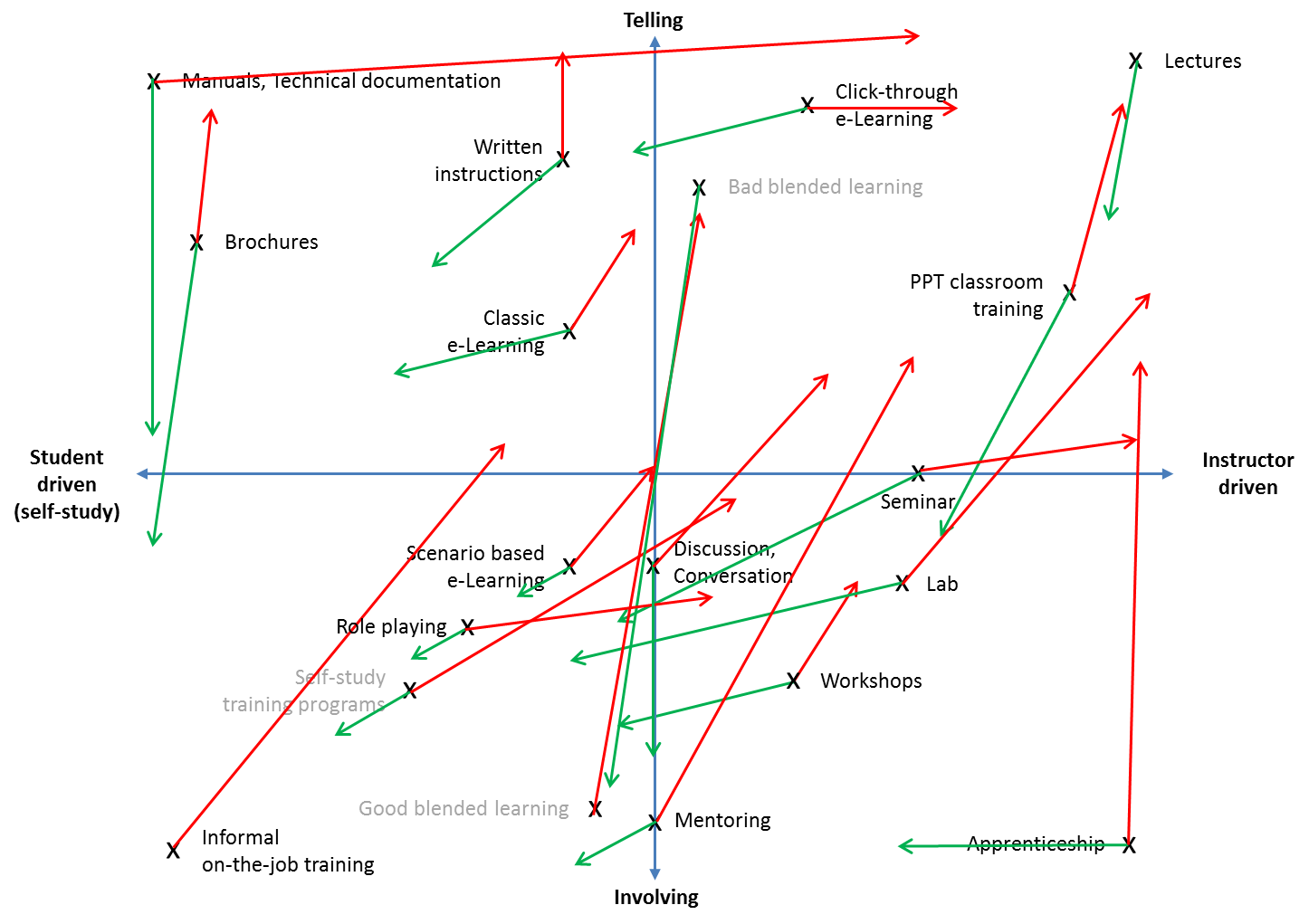 I’ll leave the quick analysis to you my beloved reader but some of you might wonder why there’s only a red arrow on “Informal On-the-job training” and, the other way around, only a green one on “Lectures”. Well, the way I see it is that Informal on-the-job training can only get worse. For example, if an organization suddenly tries to “formalize all social learning” the social learning that took place informally would probably die off pretty soon – or find new ways. The same for Lectures. It can only get better, can’t it? I’ve listened to amazing people that could inspire and even involve you in the learning process. Sadly this isn’t always the case.

In the next post I’ll look a bit more on the implications of the TIIS-Matrix’s directions and how to leverage that in a learning process.